There are good reasons for thinking that the assumptions constitutive of the framework have to be undischargeable. These reasons are drawn from seeing how the notion of alternative frameworks collapses under direct pressure, the terminus of the argument being that anything recognisable as a framework has to be identical in fundamental respects with the framework from which it is so recognised.

The argument is adapted from a familiar one offered by Davidson, who writes of "conceptual schemes" rather than frameworks, and individuates them as sets of intertranslatable languages. The argument, familiarly enough, is as follows. The relativist proposal is that there can be languages which we might not be able to recognise as such—which, that is, we cannot translate.

But how do you recognise a language as such if you cannot translate it? The problem can be stated in terms of what the only plausible candidate for a criterion of languagehood can be, namely, translatability into a familiar idiom. Since language-use involves 'a multitude of finely discriminated intentions and beliefs' which we could not attribute to someone unless we could understand his speech, we can only recognise the presence of such intentions and beliefs if translation is possible.

Moreover, if it turns out that there are differences between our and the alien's beliefs, this will be courtesy of a shared background of beliefs which makes the differences apparent. Differences are more meaningful when there are fewer of them; when there are few against a shared background of belief, the differences are more of opinion than conceptualisation—they relate to variances in the scheme's superstructure, which tolerates conflicts of view in for characteristic examples politics and taste, while still locating them in the same world.

Since the cognitive foundations of the scheme have to be shared for these more entertaining differences to be possible, the conclusion is that conceptual relativism is incoherent.

Davidson takes this to mean that the very idea of a framework is empty because it implies what the argument denies, namely, the possibility of real conceptual diversity. Underlying such arguments, very interestingly, is an implicit commitment to the controversial view that possibility is an epistemic notion, that is, that possibility is conceivability. Something is a possible state of affairs a possible past fact, a possible language or scheme only if it is constructible from actual states of affairs from what we know, from the language we speak.

Standard ways of defining possible worlds involve redistributing truth-values over the propositions constituting the world-book of the actual, or increasing their number by adding other propositions consistent with them. But to do this is to redescribe this world, not—except by courtesy of the phrase—to create new worlds.

These considerations rule out relativism. They therefore rule out OC2. There is no other way of taking OC2 than as a seriously strong relativist argument 'the river-bed of thoughts may shift' In the ideal state of things, therefore, OC1's offer of a response to scepticism is elected to stand, and OC2 is ditched.

But as the text of OC was left to us, Wittgenstein was developing arguments for both, so the next question is: is there any way they could be made to reconcile, further up the road where their parallels meet? The destination available to Wittgenstein in the light of the tension between OC1's need for an anti-relativistic resource, and OC2's undermining of this, is one made familiar by his treatment of the request for justifications in PI.

It is to say: justification must come to an end: "my spade is turned". In PI this seemed to offer a form of foundationalism in which the basis—the given, that which justifies itself by being what it is—is practice: and moreover shared practice, which in its essentially mutual character is constitutive of the content so, in the case of language, the meaning of what is based upon it.

This indeed is Wittgenstein's resource: see 7, 92, , , WR , , ; and perhaps also , , and Does this do, as a somewhat fudging way out of the problem? I think not, because the PI turned-spade thesis is considerably weakened in OC by the degree of relativism OC2 constitutes. Of course there are relativistic noises in PI: such claims as that we would not understand a speaking lion if we met one, and that we no more understand Chinese facial expressions than words, have that tendency, because they are premissed on the lack of the shared form of life which makes understanding possible.

But these relativities could be reducible—nothing implies that we cannot gain entry to the alien forms of life, that is, that we can find ways of translating lionese remarks and Chinese expressions upon doing so. Reducible synchronic relativities look very like familiar cultural differences, and hence are superficially relative only.

But the idea that the foundations of sense are themselves merely relative—that the bed and banks are in constant process of erosion—implies a greater insecurity. Consider a relativist thesis like Feyerabend's, say, in which change in assertion-conditions entails change of sense. A different way of calibrating thermometers on his view changes the meaning of "temperature".

If the bed and banks of discourse were shifting over time, meanings would change with them.


But we would be in the position of a speech community whose meanings are shifting without our realising the fact, because agreements remain. The rules change, but we all keep observing them in common as they do so. This falls foul of Wittgenstein's own rule-following considerations.

The whole community is in the dilemma of the solitary would-be language user, who cannot tell the difference between following the same rule again, and only thinking he is doing so. A different and better way out of the problem is to suppose that Wittgenstein might have developed his conflicting lines to the point where the conflict became intolerable—I would say: where he recognised the unhealthy mixing of contingent and framework propositions in his examples, which constantly seduced him into thinking relativistically: more on this shortly.

And then he just might have preferred the strong anti-relativist argument available in the line he was himself taking in OC1 on the grounds of sense. For in that aspect of his discussion he in effect reinvented the strategy, as noted, of employing a transcendental argument to show that sceptical challenge is defeated by appeals to the framework. Why not therefore see that the transcendental argument militates equally against relativism?

But if one does not supplement the response to scepticism OC1 by some such strategy, the exercise in OC is at best partial, at worst self-defeating, with the self-defeat stemming from acceptance of OC2. Or Download App. India's fastest online shopping destination. How can we help you? No result found for "OK". Please press enter for search.

Your item has been added to Shortlist. View All. 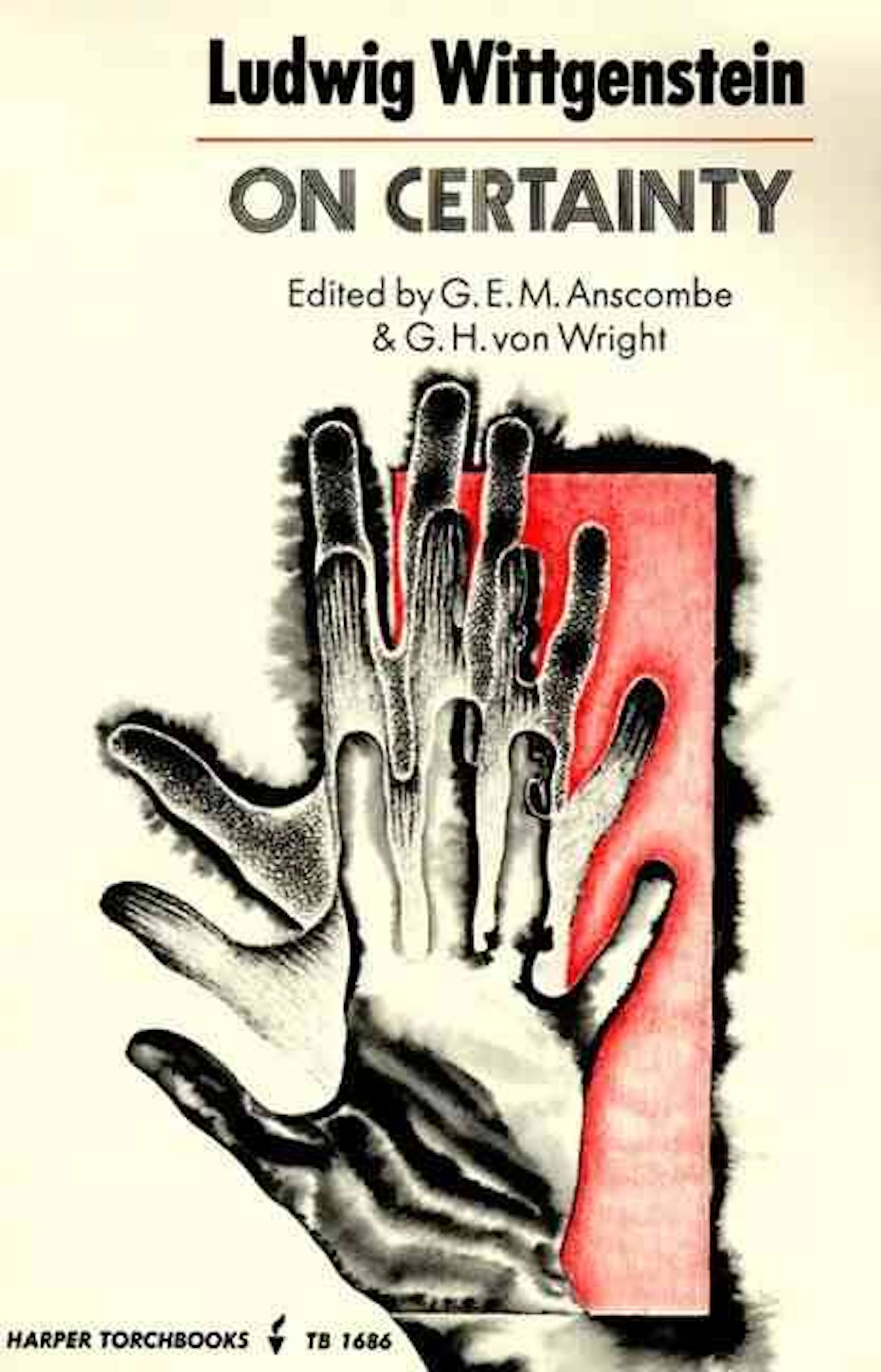 Return form will be sent to your email Id:. Philosophy Books. Epistemology Books. Understanding Wittgenstein's on Certainty. Compare Products. You have reached the maximum number of selection. You can select only upto 4 items to compare. View Order. Free Installation. There is, for one, his straight rejection of a philosophical tradition which conceives of knowledge in terms that are all too high and too theoretical.

Following the well-trodden path of religion, philosophy had detached theoretical activities from practice, placing itself firmly on the side of theory. Knowledge, then, is thought of as being something immutable, something which ideally does not change and thus provides us with insights into reality as it is. It establishes a certainty which is beyond all doubt. The knowledge it seeks, Dewey claims, cannot be had because we cannot rid ourselves of uncertainty. This is not a direct refutation of the traditional claim, since it leaves intact the possibility that we shift the grounds.

If we drop that prejudice, we will see that the separation between knowledge and action has no real grounds — theory is also an activity. What has changed is the ground upon which we assert the value of knowledge. It helps us to see that we do, as a matter of fact , possess quite numerous certainties. There is knowledge; but it cannot be found where philosophy has looked for it. It is embodied in those impure and ordinary works of artisanry which have been ignored by the tradition.

These men and women just act, and in acting, they devise tools, understanding and values. Science, for Dewey, is important because it best exemplifies the general pattern exhibited by these practical activities.

The tremendous success of science is not based on its superior mode of reflection or ratiocination in the way traditional philosophy understands it, but rather on its picking up the impure methods and practical inclinations of artisanry. This pattern, as it is well known, is called inquiry.

If the topic in question is knowledge, we have to go and look at the actual procedures in which knowledge is gained.